After three days of pounding the floor at CES 2015, I’m back in Washington, DC and ready to collect my thoughts about this year’s experience.  Originally, Donna Hoffman and I expected,as we usually do, to spent most of our time at Central and South Halls in the Las Vegas Convention Center.  Not this year.  In 2015, CES was divided into three zones:  Tech East (Las Vegas Convention Center ), Tech West (Sands and Venetian) and C Space at the Aria.  Tech West housed pretty much all of the new emerging product categories we were interested in – smart home, fitness and health wearables, 3D printing, robotics and sensors and over 375 startups in Eureka Park.  While it’s overgeneralizing to 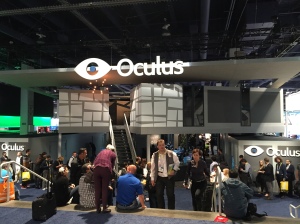 say that Tech East only showcased big TVs, its a fair generalization that Tech West came across as housing the new and emerging and Tech East the same old-same old.  With some exceptions – Oculus was situated in Tech East (BTW I wasn’t impressed by the Samsung Gear VR – it’s a step up from Google Cardboard but not a full blown Oculus experience).  So, most of our time was spent at Tech West – the “New CES.” 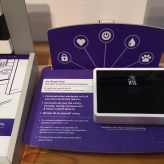 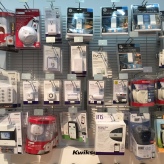 While the range of Iris products is impressive, you may not want to buy into the Lowe’s ecosystem. If not, you have plenty of other options.  Muzzley showed off a complex “one app rules them all” display where you could watch on a set of monitors as you remotely controlled nearly every aspect of a demo home through a smartphone app. I myself found the setup a bit confusing but did manage to eventually turn the living room lights in the demo home to a nice shade of blue.

Savant also promised “your whole home in one touch,” where you program Savant Scenes like “good morning” that will open your shades, warm up your house, and turn on the news according to a schedule.  While Savant promises significant cost savings from traditional third-party custom home automation/home theater installations, its complex hardware requirements necessitate hiring a 3rd party integrator for installation and any subsequent changes to your hardware setup – although once up and running the owner’s family can create pre-programmed scenes via the Savant app (cool demo mode if you click the magnifying glass in the app).  While this approach has a market (and a high end one at that), it takes control of the hardware aspect away from the homeowner and for that reason doesn’t really appeal to me personally.

More appealing to me were the DIY-oriented offerings from WigWag and Webee.  WigWag, whose booth we visited at last year’s CES, was back in Eureka Park and about to release their consumer product to market in early 2015.  We spoke at length with Jon from WigWag, who’s enthusiasm for what will emerge once consumers are able to interact and create with the Internet of Things mirrored our own enthusiasm a couple decades for what would emerge from the then embryonic Web. WigWag is open source, can run locally if needed or desired, and uses When Then rules that let the user link all of their smart devices in creative ways.  In many ways, the Savant and WigWag approaches are polar opposites.  With Savant’s top-down approach, you specify and design in advance what you want your home to do using the Savant app – after a third party integrator sets up your hardware – so it all works with a push of a button.  With WigWag’s bottom-up approach, you program lots of different when-then rules to control interactions among a range of individual devices, without necessary having a grand plan for where you’re headed.  After awhile, what you’ve created comes alive and starts to make sense – but you aren’t sure at first what you’re going to wind up when you begin, since your user experience develops and emerges over time, and may even surprise you.

Webee brings another twist, in that it can learn from your behavior and from events in the world.  Say you have your sprinklers programmed to run today but it’s going to rain – Webee will alert you and ask if you want to change your rules.  Or, suppose you have the living room lights programed to go on at 7pm but Webee notices no one is ever in that room until 8pm. It might suggest you change your rules to a later start time.

Instant Smart Home.  For some, the word “hub” makes some people shudder, as does the thought of bring in an electrician or other consultant to navigate complex smart home setups.  Enter Swichmate, a magnetic light switch cover that snaps over your existing standard light switch and uses Bluetooth low energy and your home WiFi to instantly allow your to control our light switches from your smartphone.  That’s about as simple as it gets.  One concern many people have about “going smart” in their home is the investment required to replace infrastructure.  With Switchmate, all you do is overlay a new cover over your old switches and you’re good to go.  You could even easily take it with you to your next home.

Similarly, by screwing the emberlight into a light socket, and a conventional lightbulb into the emberlight, any light bulb becomes a smart light bulb.  And, the Sensibo converts any air conditioner into a smart air conditioner.  You might think, why not use a Nest thermostat to control your AC unit?  But, Sensibo can work with window units which don’t tie in with thermostats. While these are all bandaid solutions in a way, they make sense given their relatively low cost and their appeal to homeowners who feel they have already invested enough in their home infrastructure and don’t want to rip everything out and start over.

3D Printing and Beyond. A smart home isn’t complete without a 3D printer.  The 3D printing area at CES 2015 was huge.  Walking through it, you would think that everyone these days owned a 3D printer (I still do not).

This year’s printed objects were a step up from previous years.  For example, on display was 3D printed womenswear from designer Iris van Herpen (modeled by real models to the music of a drummer playing 3D printed drums).

Branded premium 3D printed content has arrived – and not just in the area of fashion – with MakerBot showing off the Martha Stewart Living collection of household and kitchen items.  Hopefully the tacky key fobs, skulls and sunglass frames of previous years will soon be a distant memory as quality 3D content arrives.  The printed content this year did have a higher quality look, thanks in part to new materials such as MakerBot’s new filaments that let 3D printers product objects that have the look and feel of limestone, wood, iron or bronze.

In addition to new material, we are now starting to see multi-material printers, such as the Voxel8 which can produce objects – like quadcopter drones – that include the electronic circuitry needed to power and control the object.

And, speaking of drones, while there were plenty of large-format, menacing and intimidating drones on display that I wouldn’t want to run into in a dark alley, I was happy to see the new, tiny palm sized drones that look downright friendly.  The Zano Nano drone weighs in at less than 2 ounces.  One of the use cases the Zano is marketed for is personal photography, better known as the “selfie.”  That’s right, goodbye selfie stick and hello Zano!  Take your nano drone to a party, sporting event, or wedding and you’ve got photos no one else will have (at least until everyone gets one, and then we have another problem, because these drones can swarm, and who knows what that will lead to!)

However, the selfie now has some competition. Meet the shapie, the love child of the selfie and the 3D printer.  Why just photograph yourself when you can go one step further and print yourself as well?

While all of this is fun, arguably the most crowd pleasing of all 3D media is food, not filament. 3D Systems’ ChefJet (food printer) and CocoJet (chocolate printer) were both on display.  Who isn’t going to want a 3D printed birthday cake?

But, 3D food printing can only take us so far.  What if you want dinner?  Beyond 3D food printing we have the COOKI, a cooking robot.  Load your ingredients into the food trays in the side of COOKI, pick out a recipe on your smartphone, and COOKI does the rest, completely preparing and cooking your meal.  I can just see Whole Foods offering pre-packaged ingredients ready for you to slide into your COOKI robot.

Smart Stuff in Your Smart Home.  Let’s get back to the smart home.  Any home that’s going to call itself smart is going to need a robot.  The robot collection at previous CES shows has been pretty anemic and uninspiring. This year we got an upgrade to the robot collection. Future Robot showcased a couple of smart home robots.  The tall FURo-i Secure Robot is marketed more for surveillance and security, while the short and cute FURo-i Smart Home Robot has applications in home schooling, emotional service (i.e. a pet you don’t have to feed or walk), and telepresence applications (i.e., chat with the grand children).

We also liked the more utilitarian Otus Attentive Video-Conferencing Solution.  Snap on your iPad, place it on the center of a conference table (or family gathering) and it swivels to face whoever is speaking at the moment.  It’s fast!  Might be a little distracting during a meeting, but it’s a lot more fun than the speaker phones we usually use.

That’s just the start.  Listed in the gallery below are a few other things that would go well in and around one’s Smart Home: the Droplet robotic sprinkler, Edyn garden sensor, the ZutA pocket robot printer that prints as it runs over a piece of paper, Adidas‘ smart soccer ball, the Belty smart belt that loosens up if you overeat, and the sub $100 Eye Tribe eye tracking device.  Just a handful of smart objects from thousands on display.

The only thing for certain is that CES 2016 will out-do everything here! 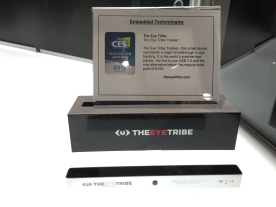